Berkshire Hathaway: Warren Buffett Does Not Get His Chance To Be Greedy

FacebookTwitterRedditPinterestEmail
There's no doubt that Warren Buffett is the world's greatest long term investor. The performance of Berkshire Hathaway (BRK.A) (BRK.B) demonstrates that with clarity. And most of Buffett's Alpha is created during and through those severe market corrections. That's when Mr. B gets to be 'greedy when others are fearful'. But in the stock market…

There’s no doubt that Warren Buffett is the world’s greatest long term investor. The performance of Berkshire Hathaway (BRK.A) (BRK.B) demonstrates that with clarity. And most of Buffett’s Alpha is created during and through those severe market corrections. That’s when Mr. B gets to be ‘greedy when others are fearful’. But in the stock market correction created by the first modern pandemic, in stepped (marched) the fed. And they came in with guns a blazin’ like never before. They shot down the stock market correction. Will Warren Buffett gets his chance to be greedy?

Here’s Berkshire Hathaway vs the market from 1985. The outperformance is even much greater pre-1985. 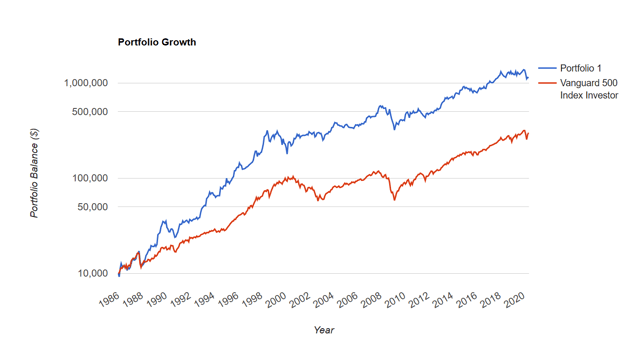 We see that initial burst out of the correction in 1987.

And, of course, Mr. Buffett was written off in the late 1990s as he had ‘missed’ the great tech run up that turned into the dot-com bubble and bust. Uncle Warren didn’t really understand technology. Or so he offered. But he did understand buying stocks when they offer long term value.

Missing out on dot-com stocks

In this chart we see Mr. Buffett ‘missing out’ on those market gains in 1999 and into the year 2000. US stocks continued to rise on everything dot-com. 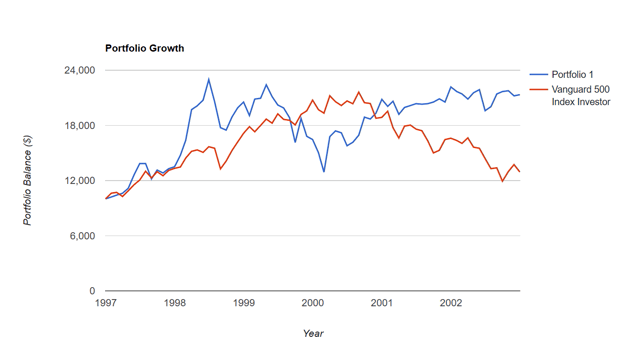 Those gains quickly evaporated of course for too many who were invested in the US stock market. The evaporation was more complete for those who truly embraced the tech stocks and tech-heavy science and technology funds, or the Nasdaq 100 (QQQ).

The lost decade for US stocks

Of course, it was the lost decade for US stocks. Here’s a chart from the beginning of the decade to near the end of that brief bull market run that came after the dot-com crash. 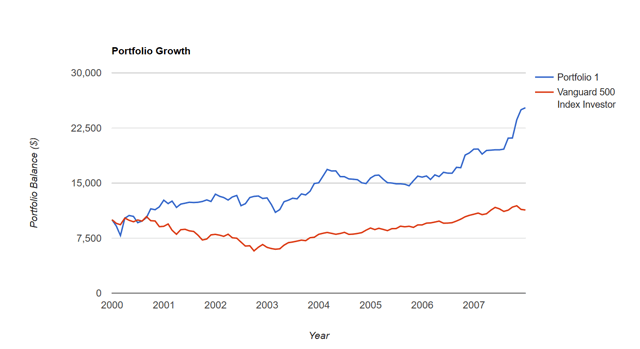 It was certainly not a lost decade for Berkshire Hathaway investors.

And if we run the chart to the end of the decade: 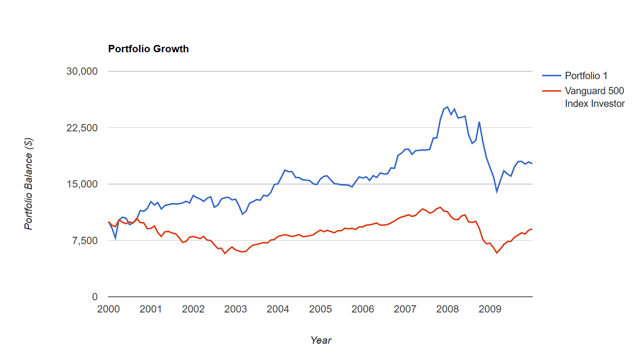 We see negative returns for US stocks and very decent gains of over 7% annually for Berkshire.

And for a full picture through the last 2 major stock market corrections, from 2000 to end of May 2020. And it’s certainly true that Berkshire has underperformed the market from 2008.

We have not had a bear market after the financial crisis. Recently, we’ve had a quick and violent market correction. We do not know yet if that’s it; or if we’ll enter a bear market that matches the economy and that usually attends a recessionary period. 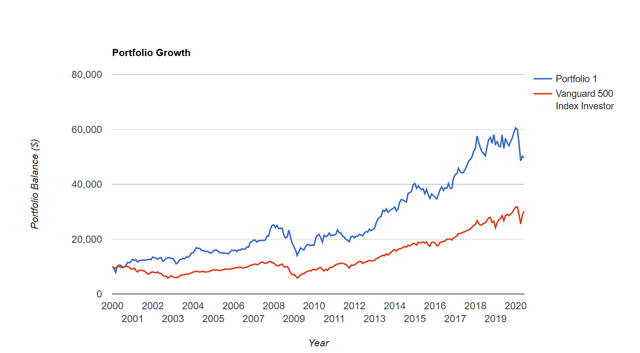 The lender of last resort

In the financial crisis, Warren Buffett was able to ride to the rescue. He became a savior for many companies and a lender of last resort.

Mr. Buffett helped to save the economy in the financial crisis. He helped with the strategy and his wallet.

They stole Mr. Buffett’s playbook. Did they also steal the ‘great deals’ and potential to buy companies that would normally go on sale during a true market correction or bear market?

Well certainly Mr. Buffett would hold a different opinion on those airlines and whether they are not worth ‘the bailing out’. As we know Mr. Buffett bailed on the airlines instead of bailing them out. He put on his parachute and made a run for the emergency exit. From CNBC, in early May:

He changed his tune in a hurry from March. From Seeking Alpha:

That’s certainly a complete about-face from March. Here’s what Mr. Buffett had to say in May after selling out of all airline positions.

Certainly, many sectors or sub sectors are in the COVID Kill Zone. And many types of businesses will have a tough go in the new normal as we restart the economies of the world. I covered that notion in:

Airlines and cruise lines are not in a ‘good place’. Mr. Buffett obviously thinks that they might end up with new ownership ‘on the other side’ of this pandemic crisis.

Yes, the world has changed.

The Globe and Mail reported on why there may not be a repeat performance. Mr. Buffett might not be able to go value hunting or lend monies with outrageous and favorable conditions. Here’s the Globe headline:

In the financial crisis:

He loaned Goldman Sachs US$5-billion through preferred shares carrying a 10-per-cent interest rate; the deal included US$5-billion in warrants for Goldman equity, plus a penalty if the preferred shares were redeemed. He made loans with similarly lucrative terms to General Electric, Harley Davidson, Dow Chemical, Swiss Re and Bank of America.

And what about in the COVID crisis?

Because, as Mr. Buffett explained, the opportunity simply isn’t there. Companies aren’t at his door begging for the privilege of borrowing at exorbitant rates. And they aren’t because the world’s major central banks have taken action to prevent credit markets from freezing up, and to ensure that low benchmark interest rates are filtering down to the rest of the market.

Yup, government agencies have taken the place of private markets. They could not wait, just in case. Warren Buffett may not get his chance to be greedy when others are fearful. Not even Warren Buffett can fight the Fed.

And perhaps there’s not that much fear these days. Politicians and government agencies do not want a real and enduring stock market correction that will destroy the confidence of investors and consumers.

They will do everything possible to support stock markets and bonds markets. Mr. Buffett steps aside.

Berkshire Hathaway is taking it on the chin. 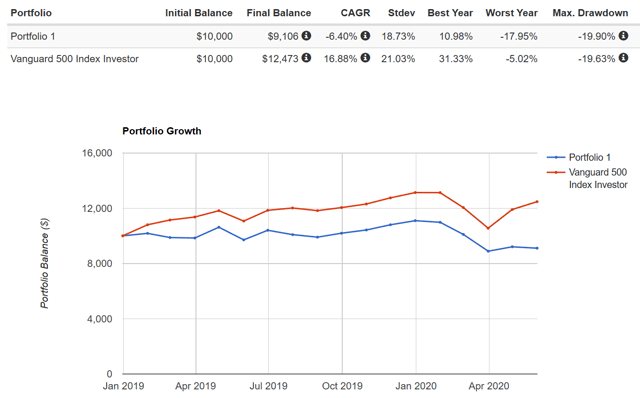 No swing and a miss?

In March, I had offered that you can:

Neither of those options has worked to date. If you were waiting for the world’s greatest investor to give the all-clear (invest like Mr. B), you missed out on some investment gains.

And, of course, as a Berkshire shareholder (Invest with) you are underperforming the market.

But Mr. Buffett also has the responsibility to his shareholders. He will attempt to profit from this in a meaningful way. He’s been waiting for this. Berkshire Hathaway is sitting on some $128 billion or more in cash. That’s his greatest cash pile in history. That cash hoard is about one-third of the value of the total Berkshire Hathaway.

Scenario: The world’s greatest investor is waiting with $128 billion in what may turn out to be the biggest stock market correction in our lifetime. How bad this gets is anyone’s guess. We are already down some 34%. I’d guess there’s much more to come.

That seems like a reasonable guess. And certainly Mr. Buffett has been quiet. What is he up to?

Yes, Mr. Buffett had been building that cash pile (now $140 billion) and he was waiting for a market correction. He just didn’t know that we’d get the first modern pandemic that would wipe out any visibility on earnings and the economy. He stated that depression was a possibility. But like you and me, he doesn’t know what is in store.

We hold a healthy position in BRK.B. It was part of the total risk management strategy in one of my wife’s accounts. That account holds some of our US Dividend Achievers along with US Treasuries. In other accounts, she also holds Canadian Dividend payers and Canadian bonds. We both own some gold ETFs as well. We have positions in the gold royalty specialist Franco-Nevada (FNV).

We’ve owned BRK.B from 2014. It was purchased for that potential for the world’s greatest investor to do his thing through a major correction. Recently it also became a cash cushion, in the hands of Warren Buffett. Things appeared to be falling into his lap. And then things took a turn with the greatest source of risk being a tricky virus. The fed and other government agencies stepped in to shore up the economy and limit any market corrections.

Berkshire is on the outside looking in

It’s certainly possible that this risk management portfolio strategy will not play out. The cost? Underperformance.

That’s OK. In fact, I’d be more than happy if the stock markets keep on keepin’ on. It would be wonderful if there is a miracle vaccine and that we do see a quicker than expected economic recovery.

I’d be happy to participate in higher prices for our US and Canadian stocks.

That said, we might be in the first or second inning. It may be the slow grind of unemployment and tepid economic growth that eventually takes down more companies and sectors. Those events might also take down the stock markets.

If not, Berkshire might continue to lag. That’s what some risk managers like bonds and cash and gold can do for longer periods – nothing. They do nothing until you really need them.

We’re happy to continue to hold Berkshire Hathaway and that $140 billion.

Thanks for reading. We’ll see you in the comment section. Do you think Mr. Buffett will get his chance? Or will he/we be left holding that big bag of money?

Author’s note: Thanks for reading. Please always know and invest within your risk tolerance level. Always know all tax implications and consequences. If you liked this article, please hit that “Like” button. Hit “Follow” to receive notices of future articles.

Disclosure: I am/we are long BNS, TD, RY, AAPL, BCE, TU, ENB, TRP, CVS, WBA, MSFT, MMM, CL, JNJ, QCOM, MDT, BRK.B, WMT, ABT, BLK, NKE, PEP, LOW, OTIS, CARR, BTC-USD. I wrote this article myself, and it expresses my own opinions. I am not receiving compensation for it (other than from Seeking Alpha). I have no business relationship with any company whose stock is mentioned in this article.