Dana White Erupts at Claims of Underpaying Fighters, Hits Back at McGregor

FacebookTwitterRedditPinterestEmail
By BoxingScene Staff Published On Wed Jun 10, 2020, 02:05 AM EDT UFC President Dana White is firing back at the recent claims that he underpays his fighters. As BoxingScene.com recently reported, company superstars Jon Jones and Jorge Masvidal have openly complained that White is not offering them adequate compensation to fight again. Both fighters have…

UFC President Dana White is firing back at the recent claims that he underpays his fighters.

As BoxingScene.com recently reported, company superstars Jon Jones and Jorge Masvidal have openly complained that White is not offering them adequate compensation to fight again.

Both fighters have asked White to release them from their respective UFC contracts. 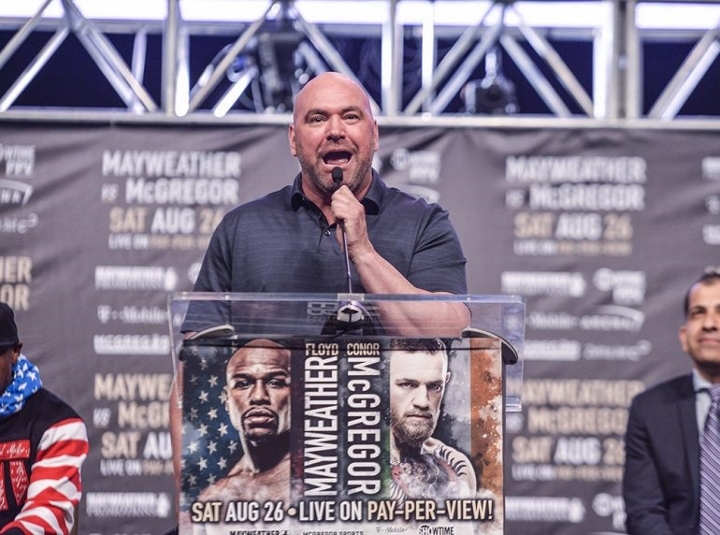 Jones discussed, in detail, that he was never properly paid by the UFC.

And Masvidal has explained that UFC pays out a far smaller percentage of revenue to their athletes when compared to other major sports leagues like the NFL or NBA.

White was directly confronted on the matter during an interview on ESPN’s First Take, and he hit back at the claims being made by both men.

“Does anybody feel like they make too much money?. Nobody does. If we were talking about a thing where these guys had old contracts from three years ago and it’s like ‘that was three years ago that I did this deal, let’s [renegotiate].’ They signed these less than a year ago. This was months ago.

“By the way, I don’t know if you know this but we’re in a pandemic and no other sports are going. Oh, by the way, every other sport out there is arguing about money right now. I haven’t laid off one employee. I haven’t asked any of my fighters to take less money, and you don’t hear me out here crying about, ‘No, I don’t get any gates, I don’t have this, I don’t have [that].’ You don’t hear me crying. I’m running my business. I’m paying everybody. Right now, if you think it’s easy to be a business owner right now here in today, you are right out of your mind. There has never been a harder time to do business than right now. Guess what? I’m pulling it off.

“So right now we’re in a pandemic and all this stuff is going on. We just signed a contract eight months ago. You see me saying, ‘Oh no, no, this is going on and that’s going on, I have to pay you less money.’ No, I’m paying them exactly the same amount of money no matter what’s going on. In the history of this company, I’ve never asked a fighter to go backward, ever. I have 630 fighters under contract and we’re talking about two.”

And company superstar, Conor McGregor, announced his retirement this past weekend.

McGregor then took part in an interview where he criticized the UFC, stating that they weren’t offering him anything of worth to increase his motivation to fight again.

Most believe the root of McGregor’s issue with the UFC is also connected to his monetary demands to fight again.

“He wants to fight [Justin] Gaethje. Gaethje just won to get the fight with Khabib,” White said. “He just beat Tony Ferguson. Conor had the opportunity to slide into that spot if Khabib or Tony fell out. He came back and said ‘I’m not a replacement fighter, I’m not going to do it.’ He would be in that position now if he took the fight. He didn’t, Gaethje did so Gaethje gets it.”

“Conor McGregor is frustrated right now because I mean look what’s going on. Look at what we’re pulling off. We’re literally just going to Yas Island right now to pull off these fights because the hardest thing to do right now is to get people into the country from other parts of the world. We are a true global business. We’re the only one pulling off live sports right now. If I continue to do fights in the United States, I’m going to burn out all my American talent.

“Now we got Yas Island ready to go, it’s set up. This is just a matter of Conor being frustrated I think in that he can’t get what he wants right now. It’s just not possible.”