A service that detects ‘China apps’ goes viral in India

FacebookTwitterRedditPinterestEmail
The app’s name says it all: Remove China Apps. Developed by a self-proclaimed “Indian startup” named OneTouch AppLabs, Remove China Apps crossed 1 million downloads within 10 days of launch in May. Its overnight success came amid rising China-Indian tensions over the countries’ disputed border in the Himalayas. Most of the app’s installs are found… 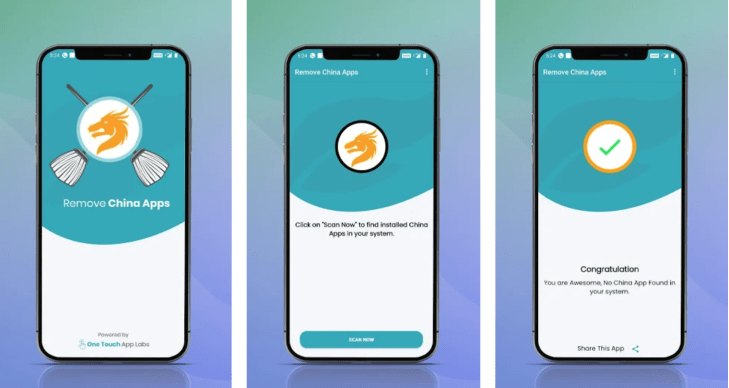 The app’s name says it all: Remove China Apps.

Developed by a self-proclaimed “Indian startup” named OneTouch AppLabs, Remove China Apps crossed 1 million downloads within 10 days of launch in May. Its overnight success came amid rising China-Indian tensions over the countries’ disputed border in the Himalayas.

Most of the app’s installs are found in India, although analytics data from App Annie shows that it has been gaining momentum in Australia in the last few days, rising to No.5 among Android tools apps.

The app is straightforward to use: Click scan and it will either congratulates one on having no Chinese apps or displays a list of those that are determined to be of Chinese origin — like TikTok.

India is one of the top overseas destinations for Chinese tech companies. Xiaomi and Oppo have dominated mobile sales there for some time and a significant number of top Android apps in the country are developed by Chinese companies, as my former colleague Jon Russell acutely pointed out. The mood has turned against China as India recently told startups that money raised through Chinese investors would go through additional scrutiny.

On Android, Remove China Apps has a near-perfect 4.9 out of 5 stars rating from nearly 180,000 reviews. It claims it can identify an app’s country of origin based on market research, while it does not guarantee the result’s accuracy. It leaves the choice to users to remove the apps it flags, saying it provides the service for non-commercial purposes.

Despite its instant popularity, the app’s background is cryptic. The company website is a simple WordPress-based site and Remove China Apps is, in its own word, its first product. This is an underwhelming achievement in contrast to its grandiose statement claiming it has “experience of 8+ years in mobile and web application design, development and management.”

It’s also unclear how the developer defines “China apps.” For instance, will apps developed by overseas Chinese sound an alarm? How about a Chinese subsidiary that operates a fully localized team abroad? User tests show that it flags the U.S. video conferencing giant Zoom. Does the fact that its founder Eric Yuan, an American citizen born in China, makes Zoom a “China app”? Meanwhile, it misses some obvious targets, like Chinese apps that come bundled with smartphones.

As of the writing, we haven’t heard back from the company regarding the methodologies it uses to spot “China apps.” It does, however, disclose online what information it collects from users, including one’s device model, the language set for the device system, the device manufacturer and app-specific information such as the version code of apps, the version name of apps, and the package name of apps.

The app has prompted heated debate among Chinese developers targeting international markets. Baijing, or Beluga Whale, a popular online community for China’s app exporters, wrote (in Chinese) that Remove China Apps is “a form of market disruption” and called on Chinese developers to report the app to Google.

Many are wary of rising anti-China sentiment overseas. As the founder of a major app exporter said to me: “I think what happens in India will happen in other countries in the future, so this is a long-term impact that should factor into Chinese developers’ calculation.”

There’s perhaps some assurance for Chinese developers. While users of the detection app applaud its mission, a few complain that there are no immediate replacements of certain Chinese apps. One of the top indigenous alternatives recommended by users is Jio Platforms, the well-funded Reliance subsidiary that operates a wide range of mobile apps.