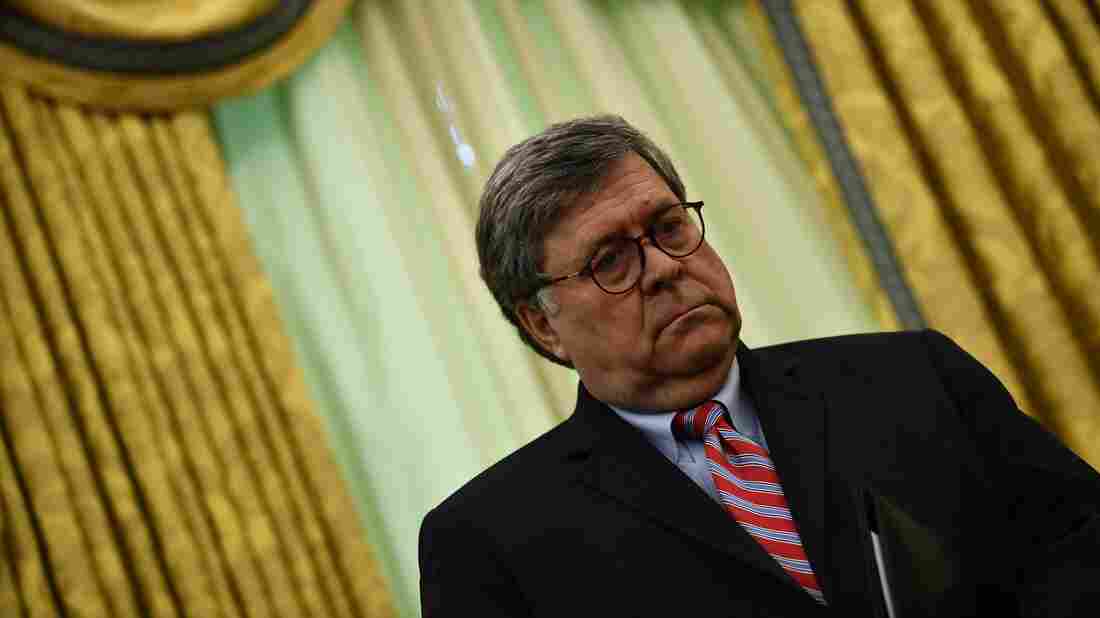 Attorney General William Barr, pictured in the Oval Office on May 28, is holding a press conference on Thursday with other Justice Department leaders. 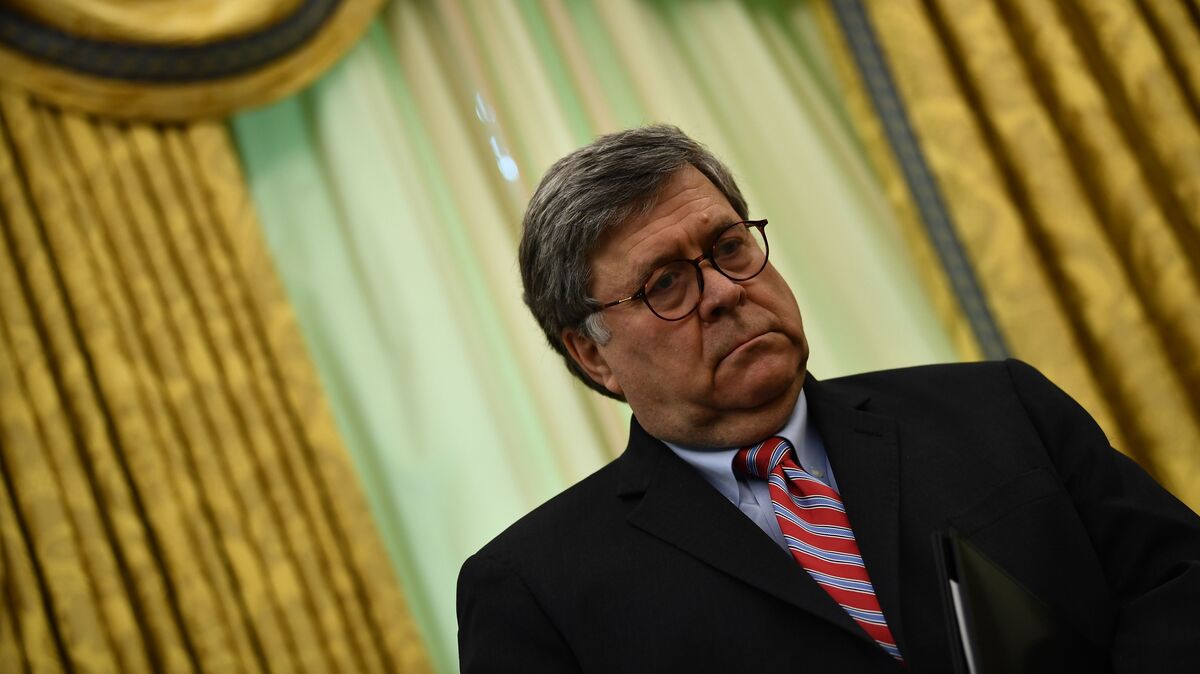 Attorney General William Barr, pictured in the Oval Office on May 28, is holding a press conference on Thursday with other Justice Department leaders.

Attorney General William Barr on Thursday defended the decision to order that protesters be driven back from a park near the White House earlier in the week and said extremest groups were involved in sometimes violent demonstrations in the aftermath of George Floyd’s death.

Floyd died on Memorial Day after being pinned down at the neck for nearly nine minutes by a Minneapolis police officer, prompting massive protests across the country denouncing racial inequality and police brutality. The now-fired officer, Derek Chauvin, has been charged with second-degree murder.

Speaking at a news conference Thursday with other law enforcement officials, Barr said that it is “undeniable that many African Americans lack confidence in our American criminal justice system,” adding, “This must change.”

He called Thursday a “day of mourning,” referring to Floyd’s memorial service.

Of video showing the police officers’ conduct when arresting Floyd, Barr said, “It is impossible for any normal human being not to be struck to the heart with horror.”

A “witches brew of extremists”

Barr said the aftermath of Floyd’s death has produced a challenge to the rule of law in the form of “lawlessness, violent rioting, arson, looting of businesses and public property, assaults on law enforcement officers and innocent people.”

“We have evidence that Antifa and other similar extremist groups, as well as actors of a variety of different political persuasions have been involved in instigating and participating in the violent activity,” Barr said. “And we are also seeing foreign actors playing all sides to exacerbate the violence.”

Barr says the government is dealing with a “witches brew of different organizations” fomenting violence.

Barr said since Saturday there were 114 injuries to law enforcement personnel in Washington, including 22 that required hospitalization. Donald Washington, director of the U.S. Marshall’s Service, said 21 U.S. courthouses across the country have been damaged. 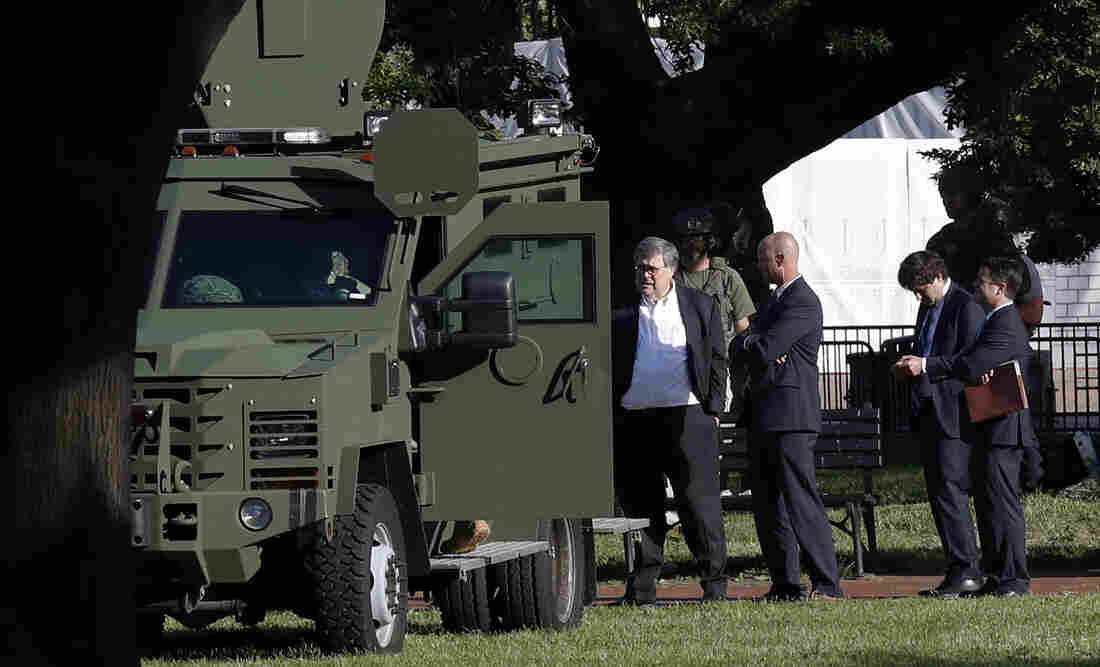 Attorney General William Barr (center) stands in Lafayette Park across from the White House as demonstrators gather to protest the death of George Floyd on Monday.

Barr has been leading the federal response to the protests, some of which had been violent. Barr has sent specialized teams of federal agents to help control protests in Washington, D.C., and Miami, and the FBI is setting up command posts in cities across the country.

In particular, Barr defended the federal response to the protest in Lafayette Park in Washington, D.C., on Monday, saying demonstrators had thrown projectiles and the group was “becoming increasingly unruly.”

The actions of police, who aggressively cleared the largely peaceful protesters, have been broadly criticized.

“We asked three times” for the demonstrators to move back one block, Barr said on Thursday. When they refused, he said, “We moved our perimeter.”

Barr also defended the large amount of federal law enforcement officers in Washington, D.C., saying it was “the federal city” and there was a large scale disturbance that was threatening federal property including government buildings and monuments.

House Speaker Nancy Pelosi, D-Calif., has called for more transparency about who is in charge of law enforcement in the capital.

“We are concerned about the increased militarization and lack of clarity that may increase chaos,” she said in a letter to Trump, requesting “a full list of the agencies involved and clarifications of the roles and responsibilities of the troops and federal law enforcement resources operating in the city.”

Trump’s walk to the church

Barr also defended the president’s widely criticized visit to St. John’s Church on Monday amid the protests. He said the decision to clear Lafayette Park, across Pennsylvania Avenue from the White House, was made before he was aware of Trump’s plans.

The church had been damaged in a fire the night before. Trump walked to the church and held up a bible after giving a speech at the White House threatening to use the military to quell protests. The bishop who oversees the church had sharp words for the president.

“He did not offer a word of balm or condolence to those who are grieving,” Bishop Mariann Edgar Budde of the Episcopal Diocese of Washington told NPR.

Barr said Thursday that Trump had the right to go and denied it was a political move.

“The president is the head of the executive branch and the chief executive of the nation and should be able to walk across the street to the church of presidents,” Barr said. “I don’t necessarily view that as a political act.”

Barr said he did not know that the president was visiting the church when the decision was made to clear the protesters. Barr and Defense Secretary Mark Esper accompanied Trump to the church.

“There was no correlation between our tactical plan to clear the perimeter out by one block and the president’s going over to the church,” Barr said. “The president asked members of his Cabinet to go over there with him, the two that were present, and I think it was appropriate for us to go over with him.”

Esper said Wednesday that he was “not aware of exactly where we were going” and has been critical of threats by Trump to use the military against violent protests.

“Trying to find a way forward”

Barr was joined Thursday by FBI Director Christopher Wray, as well has the heads of the U.S. Marshals; the Bureau of Prisons; Alcohol, Tobacco, Firearms and Explosives; and the Drug Enforcement Administration.

Wray said he was “appalled and profoundly troubled by the video images” of the events that led to George Floyd’s death.

He said both Floyd’s family, as well as the entire country was “trying to find a way forward.”

“That’s because this is not just about George Floyd,” Wray said. “This is about all of those over the years who have been on justifiably killed or had their rights violated.”

He added, “When law enforcement fails to fulfill its most basic duty to protect and serve its citizens, particularly members of a minority community, it not only tarnishes the badge we all wear, but erodes the trust that so many of us in law enforcement have worked so hard to build.”

The Justice Department leaders reiterated the right of Americans to exercise their First Amendment right to peacefully protest but called out the smaller group of people who have “hijacked” those efforts.